In Japan, most breweries make sake on a seasonal schedule. That means production for a given Brewing Year (B.Y.) usually starts in October and runs through the time of rice planting in the late spring or early summer. When the Brewing Year is winding down, there are some ceremonies and gatherings to mark the end of the season and recognize all effort and hard work of the brewers. 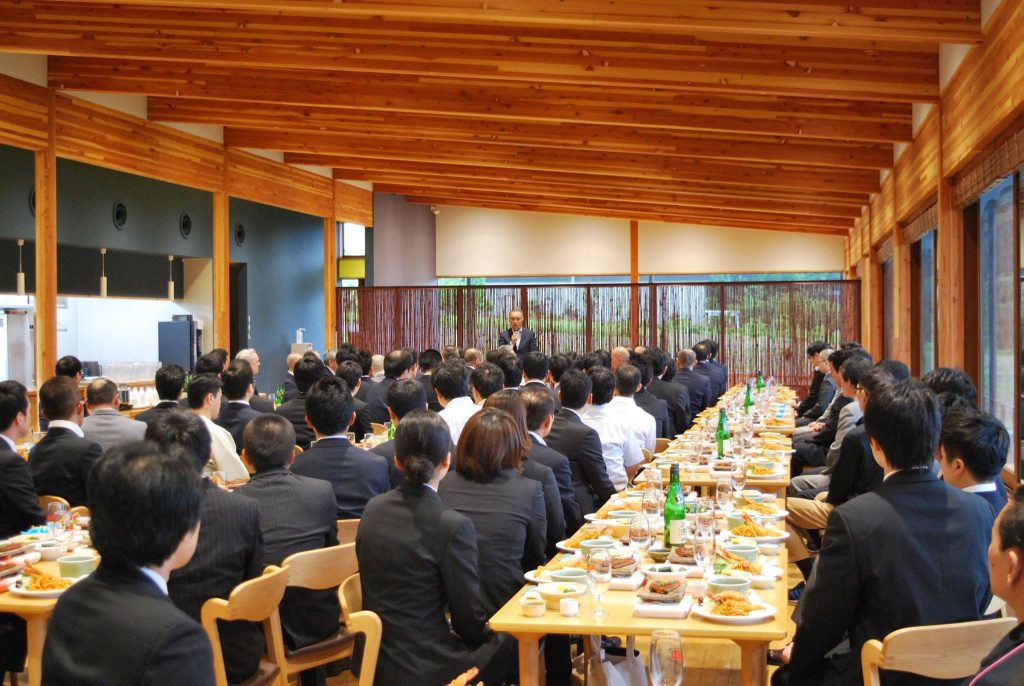 As the brewing season is drawing to a close, there is that day when you steam your last batch of rice. This is the day that you finish the additions of rice and koji to your last batch of sake. Of course fermentation will continue for another month on all the tanks you’ve started, but from this point on, no new tanks will be created and no more rice will be steamed. “Koshiki Taoshi” means to knock over the rice steaming vat. The idea behind Koshiki Taoshi is to tip over the rice steaming vat for cleaning as it won’t be used any more this season. 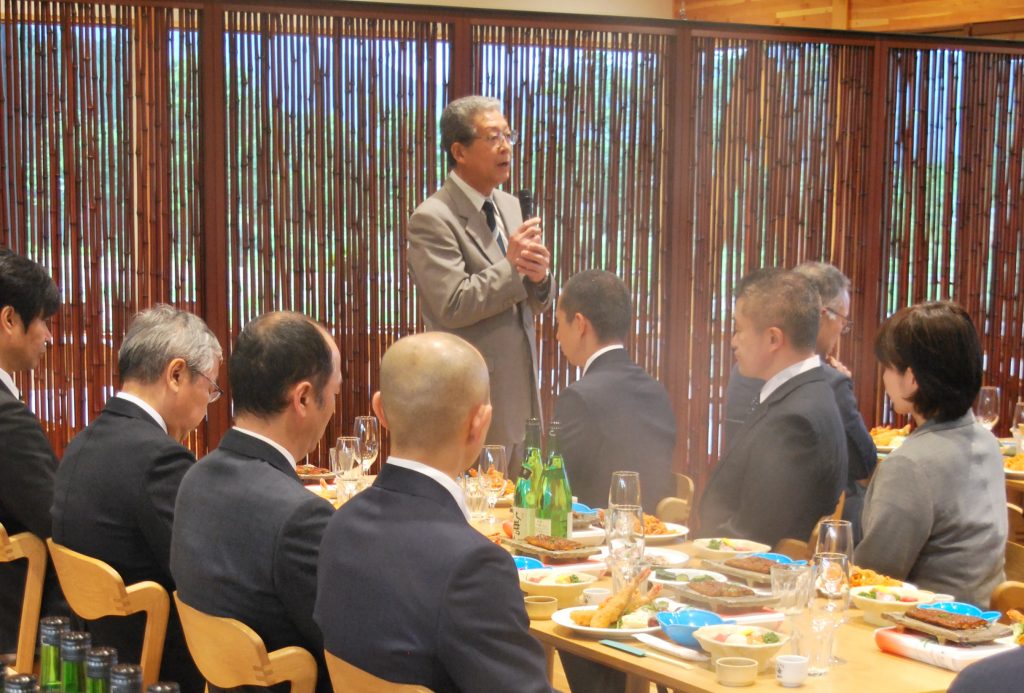 Hakkaisan’s Toji or Master Brewer greets all the brewery workers.

When I arrived at the event, I was surprised to see everyone dressed in a serious dark suit. I was used to seeing all the brewers in their white brewery uniform, but now I was seeing everyone dress up in civilian clothes. The mood was serious at first with everyone sitting quietly waiting for the official start. Once the event began we first had greetings and speeches. Hakkaisan President Jiro Nagumo started by thanking everyone for their hard work this year and talking about the Hakkaisan company spirit. Then Mr. Shigemitsu Nagamo, the Toji or master brewer, also thanked everyone for their hard work and dedication this year. Next was our Kanpai or toast. This was the signal that the party could begin. For this occasion, all the brewers were able to enjoy Hakkaisan’s Special Daiginjo sake. This is an ultra-premium sake not sold to the public, and it was a chance for all the brewers to taste the gold standard sake produced by Hakkaisan. This sake embodies what we try to achieve as a brewery. 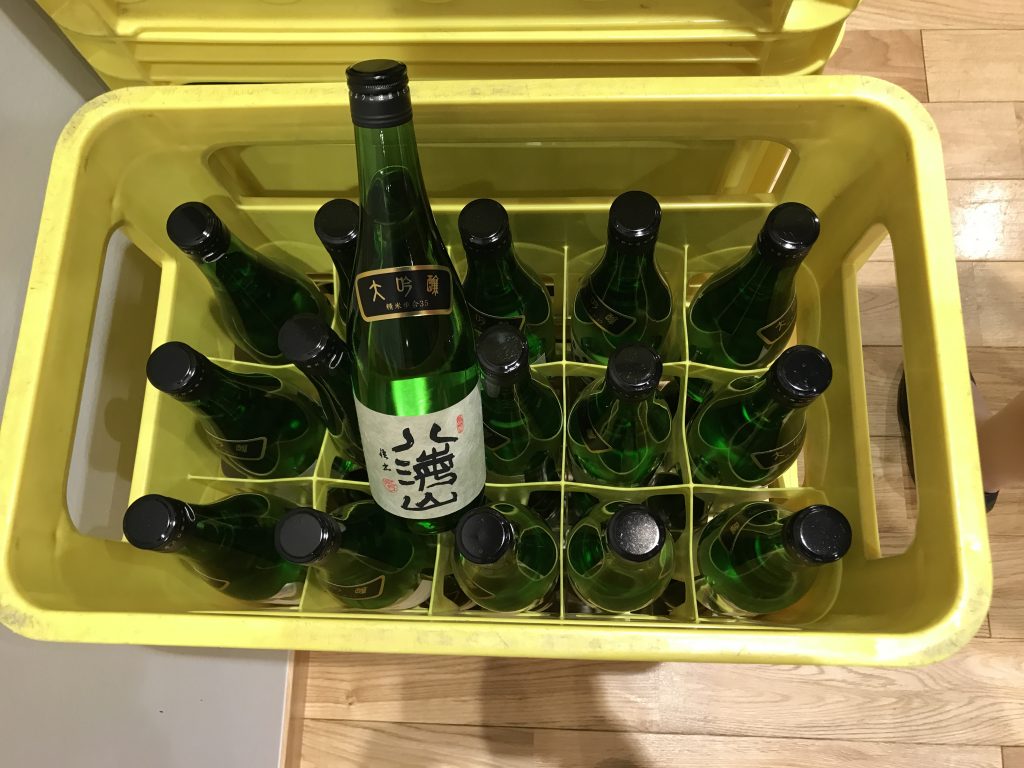 Hakkaisan Special Daiginjo. An ultra premium sake not sold to the general public.

Everyone was able to enjoy a great meal and the Special Daiginjo served chilled and warm as well. Hakkaisan beer was also flowing! It is a custom in Japan for the new employees to go around and pour sake for their superiors. This is a great way to foster communication and it really get people talking to one another and in the mood to celebrate. It is also a time to go around and say “thank you” to any co-workers that especially helped you during the year.

Nice Dinner for everyone to enjoy together. A thank you for all the hard work of this brewing season.

Next came a really exciting moment. All of the sake brewers and this year’s new employees gathered at the front of the room to sing a “sakauta” (酒歌) or sake brewing song. Traditionally, these songs were sung in the brewery to keep time while mixing the tank or some other such task. The songs have a driving rhythm to keep brewers mixing the vat at the same pace. At Hakkaisan, this song is not used in the brewery everyday, but is still performed at special events to keep a connection to this piece of sake culture alive. It was fantastic to see! 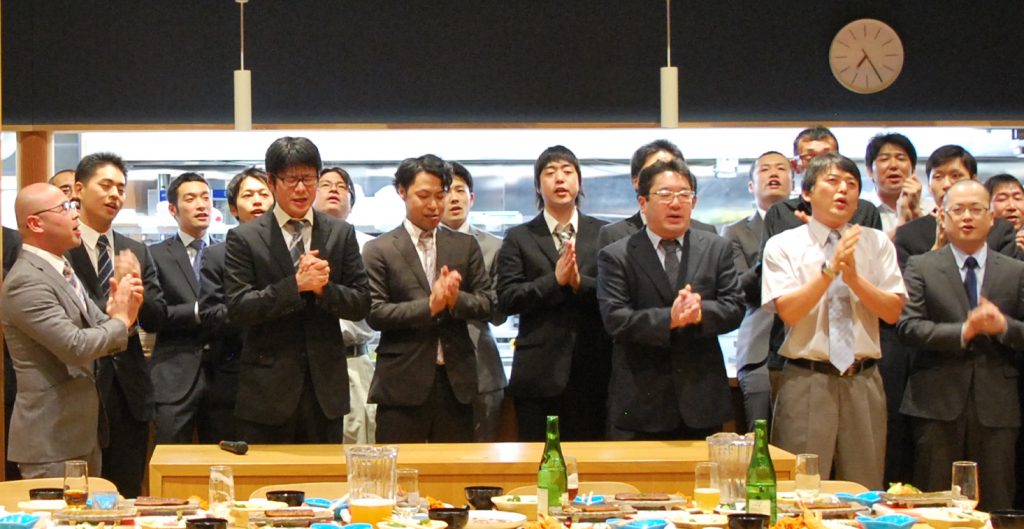 All Brewers joined in singing the Sakauta, or sake brewing song.

The Koshiki Taoshi event is not the end of brewing, but more a sign of things winding down for the year. Everyone enjoyed the party, but for most, it was back to work and back to brewing the very next day!